the most popular attractions and events happening in the UK this Christmas! 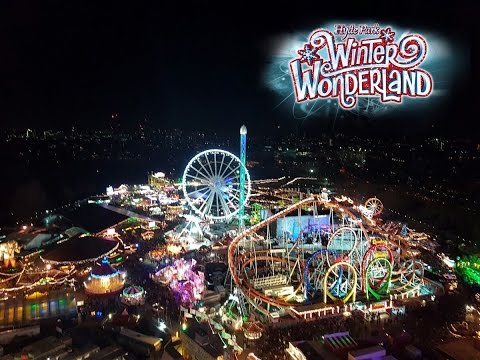 Its that festive time of the year again, and yes you’ve guest it! time to get in to the spirit of Christmas  once again with so many things to do and see .with that being said The  UK has so many  special places to visit and see from the Christmas market to winter wonderland . qobid’s  put togeter a list of the best places to visit this Christmas season enjoy and merry crimbo !

Winter Wonderland offers best Christmas market in London and nationwide . Home to the world’s tallest transportable observation wheel, a Magical Ice Kingdom and an array of comedic acts at its own Comedy Club, along with the UK’s largest open air ice rink and plenty of bars and food stalls, there’s something for all the family to enjoy. Enjoy jaw-dropping circus acts and don’t miss the arrival of Paddington on Ice, a stunning family-friendly show combining cutting-edge choreography, toe-tapping music and impressive costumes.

2.Northern Lights on the Isle of Skye 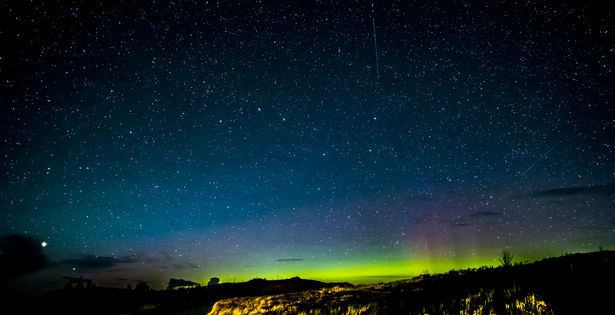 there are actually plenty of places to see the Aurora in the UK , but it’s the Isle of Skye which has proven particularly popular for putting the odds of seeing the lights in your favour.

Of course there’s no guarantee you’ll see the lights, but the Isle of Skye still offers up some breathtaking landscapes, beaches and charming fishing villages to explore – so its a win all round! 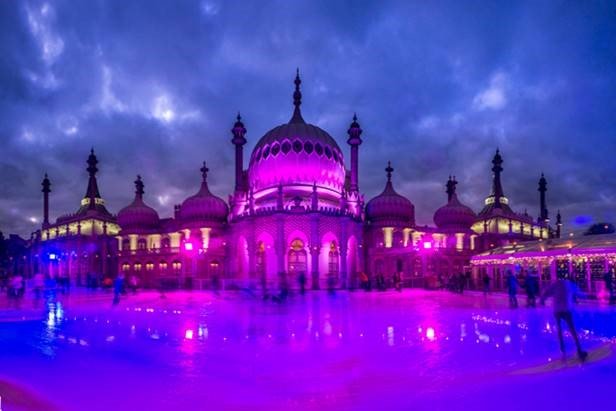 The Royal Pavilion host the most beautiful Ice Rink in the South East. And it’s not too late to have a go. The Ice Rink is open until the 14th of January. So if you haven’t had a go already, get your ticket for the weekend. Ice skating is a great pass time and activity to do with friends. There is a rink-side bar and kitchen serving warming snacks, delicious lunches and dinners, a great bar selection, kids crowd pleasers, mulled wine and hot chocolate with marshmallows. So once you’ve finished skating in the cold, you can come inside for a warming treat. The website has a video for how to ice skate and there is a hand rail around the entire rink, so you can hold on until you’re confident. 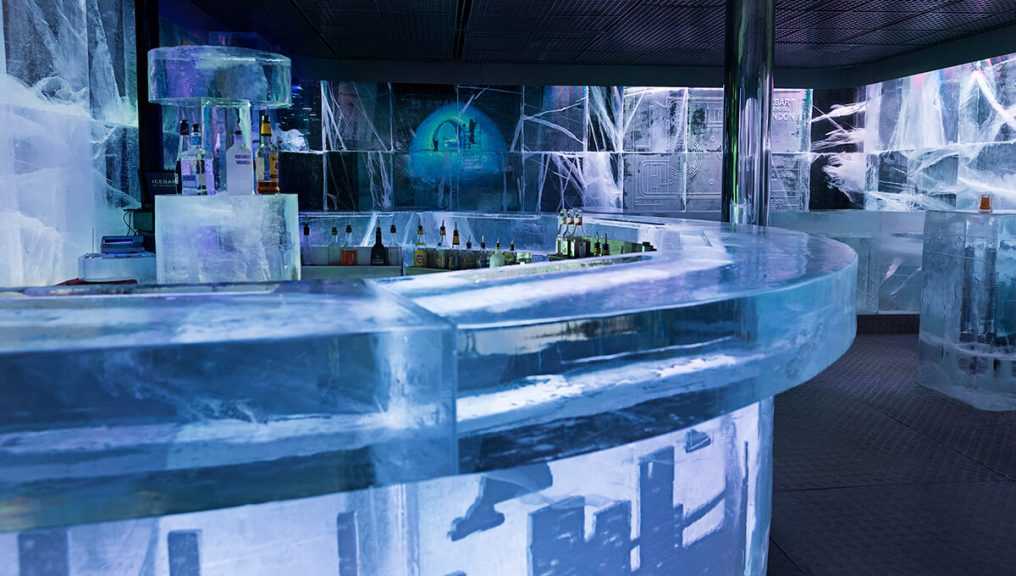 located in Mayfair  London is the icebar where you can have drink and chill literately! with mostly evetyhing made out of ice from  the bar to table and seating even the cups are made from ice .the ice  bar is Below Zero however is still a uniquely memorable experience and the
perfect venue for parties, product launches, private dining, Christmas celebrations, meetings
and corporate events.

5.Snow White at the London Palladium 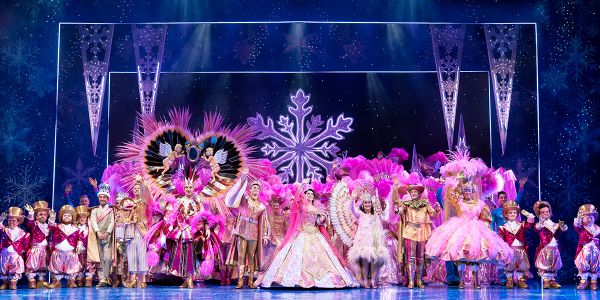 The London Palladium panto invariably has the starriest cast – this year’s Snow White boasts Dawn French, Julian Clary and Nigel Havers. But celebs pop up all over the country: at the Opera House Manchester, Gareth Gates stars as Cinderella’s Prince Charming and Les Dennis plays one of the Ugly Sisters. Debbie McGee takes to the stage in Sleeping Beauty at the Grand Theatre, Wolverhampton, while Lisa Riley heads the cast of Beauty and the Beast at the New Theatre, Cardiff.

In the battle of the Strictly judges, audiences can boo Wicked Stepmother Craig Revel Horwood in Cinderella at the New Victoria Theatre, Woking and cheer Shirley Ballas in Jack and the Beanstalk at the Liverpool Empire.

6.Skating rink at the Skylight at Tobacco Dock (london ) 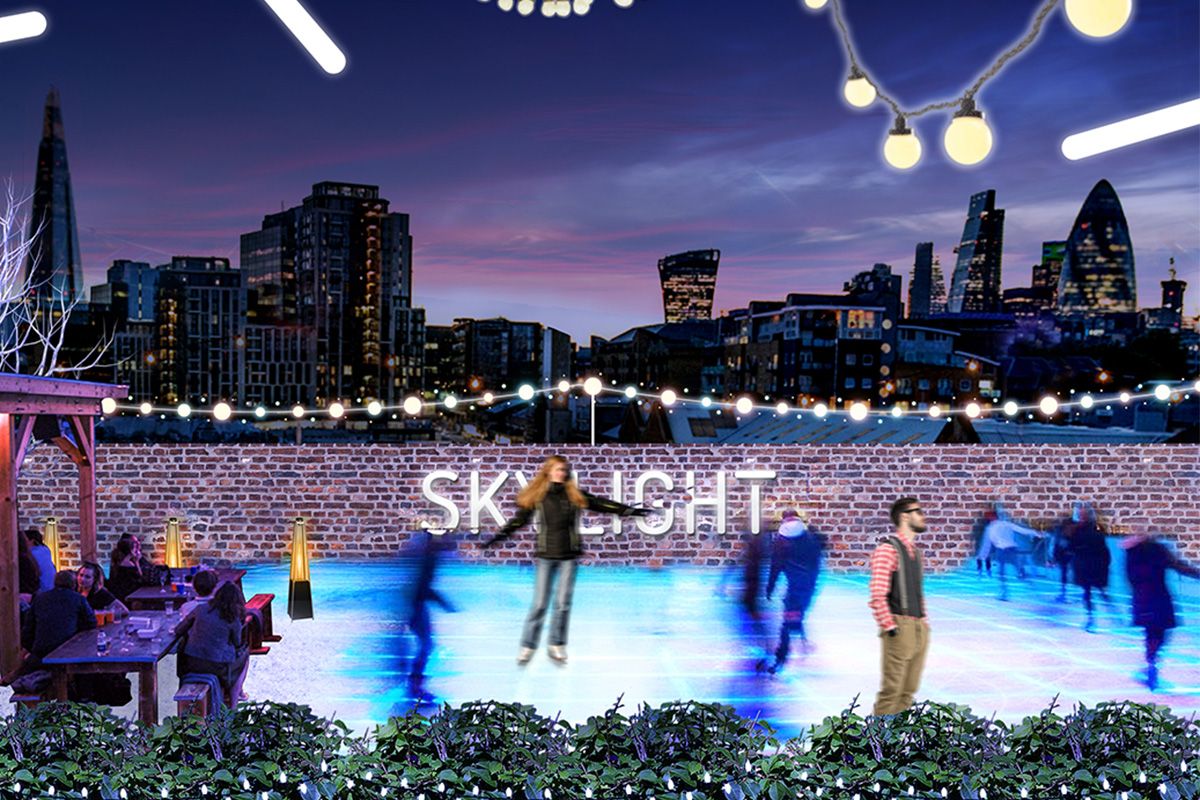 A converted multi-storey carpark in Wapping might not be your first thought when presented with options to spend an evening, but Skylight is the newest kid on the block of the London rooftop scene, opening earlier this year. However, things have got really quite snazzy with the opening of their rooftop ice-rink for the winter period, offering iceskating fans the chance to glide along the ice whilst taking in unobstructed views of London’s finest stretches of The City’s skyline. 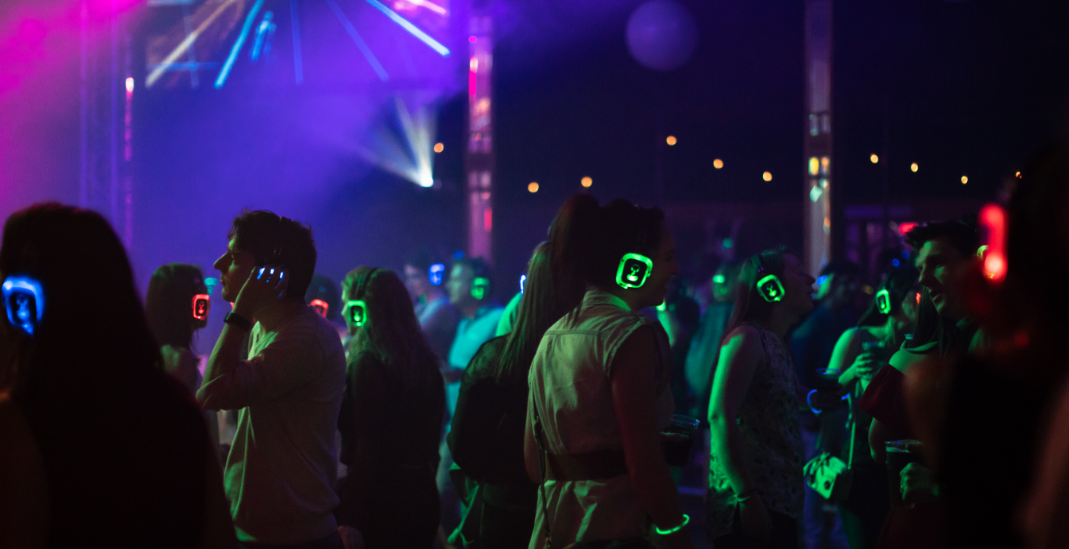 Party the night away with your friends at the silent disco you choose what you listen to and what the DJ plays  . From disco classics to hardcore house, you can pick your channel on the headphones . social music is the new thing 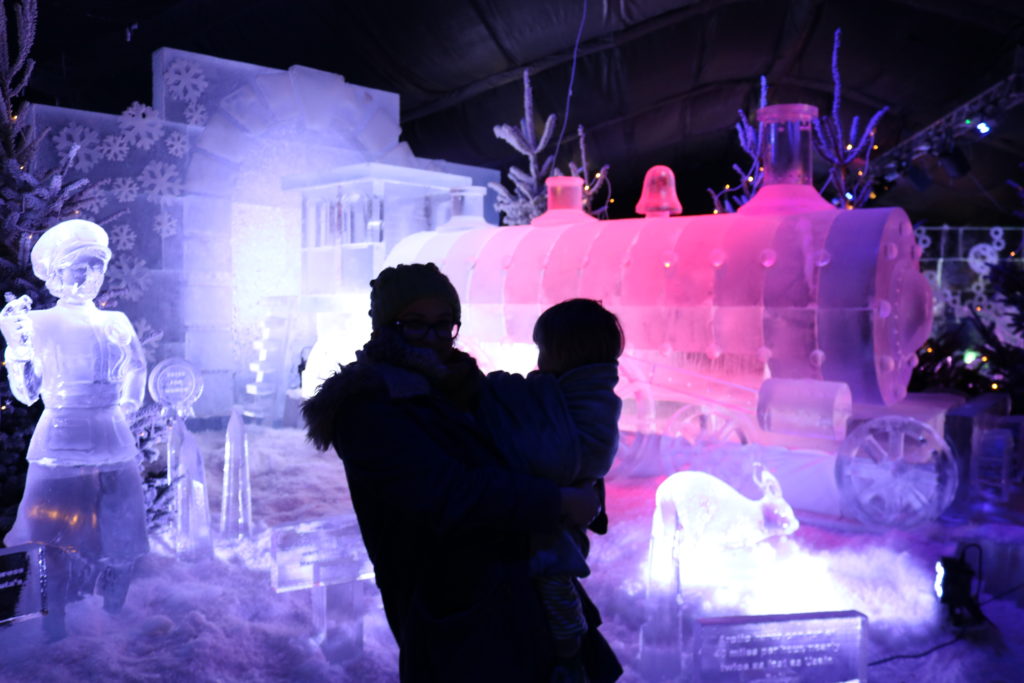 Manchester has a new Ice Village in Cathedral Gardens, centred around an ice cavern with more than 100 ice sculptures of polar bears, huskies, a yeti and even a frozen Rovers Return sign. Visitors can sit in Santa’s ice armchair and take a selfie while “trapped” in an ice block. There is an Arctic Bar serving frozen cocktails, an ice rink and games such as hook an iceberg (free entry, some ticketed attractions, until 5 Jan) 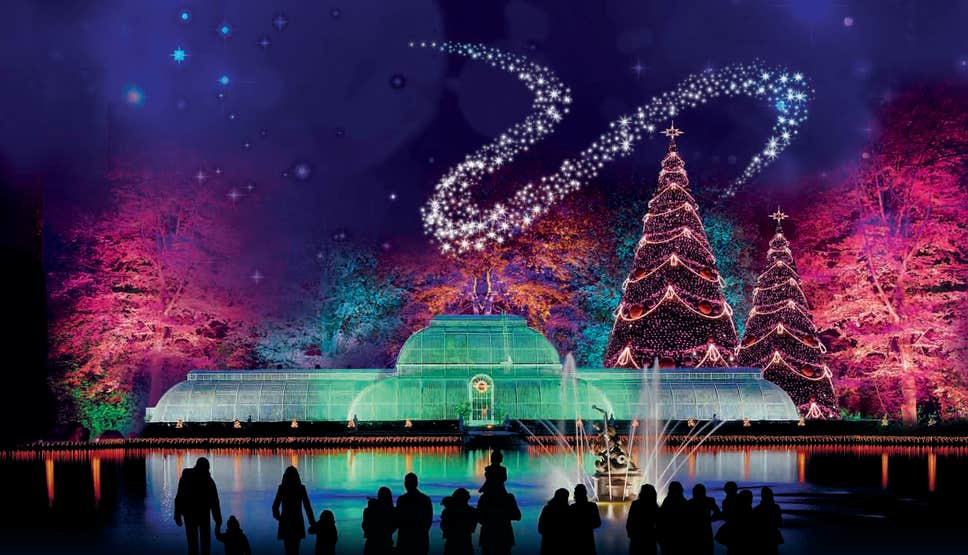 Christmas lights show where the magic begins  that will truly blow your mind Kew Gardens opens after dark this festive season and as twilight falls the magic begins.The illuminated trail offers something for everyone as the one mile sparkling path winds its way through the world famous botanic gardens. Wander beneath tree canopies drenched in Christmas hues and gaze at glowing waterside reflections as clusters of illuminated fountains dance in an explosion of colour set against the iconic palm house. Walk through playful ribbons of light, stroll a fairy-tale avenue of larger-than-life winter flora, stop at the scented fire garden and don’t forget to look out for the singing holly bushes along the way. 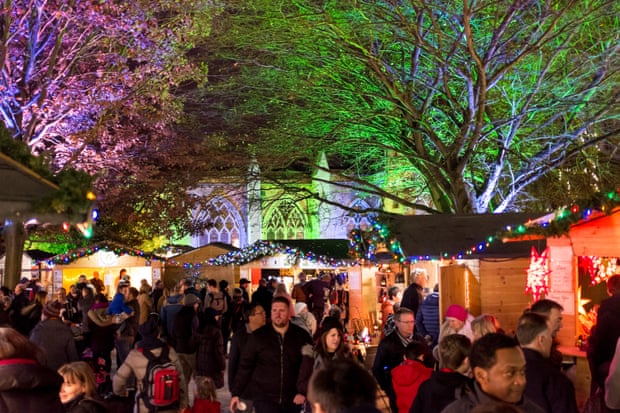 St Albans is holding its first Christmas festival this year, in Verulamium Park featuring a virtual-reality Father Christmas experience, an igloo with a silent disco, a snug showing Christmas films, a fairground and ice rink, a market, a champagne bus and a tipi bar with music from choirs, acoustic singers and DJs. The city also has its first “living advent calendar” – with a different festive shop window revealed every day in December – and a family-friendly exhibition on board games at the new St Albans Museum + Gallery. There are carols on the hour at the cathedral on 15 Dec, and carols until closing at several pubs (10, 13, 17, 18 and 20 Dec). The city hopes to equal the success of York’s hugely popular Christmas festival (until 23 Dec,).

This Christmas festival is a great event for festive foodies. There are cookery demonstrations from more than 60 chefs, including “Padstein’s” own Rick Stein, plus Nathan Outlaw, Angela Hartnett, Mitch Tonks and Phil Vickery. This year, a new wine theatre is running speed tastings and masterclasses. The market has 100-plus stalls, selling regional food, such as Christmas pudding steeped in Somerset cider brandy and Devon port stout; local drinks including Cornish pastis; and products – blankets, ceramics, jewellery – by craftspeople from the south-west. Events include a Santa cycle and fun run, live music, carols, a lantern parade and fireworks over the harbour. 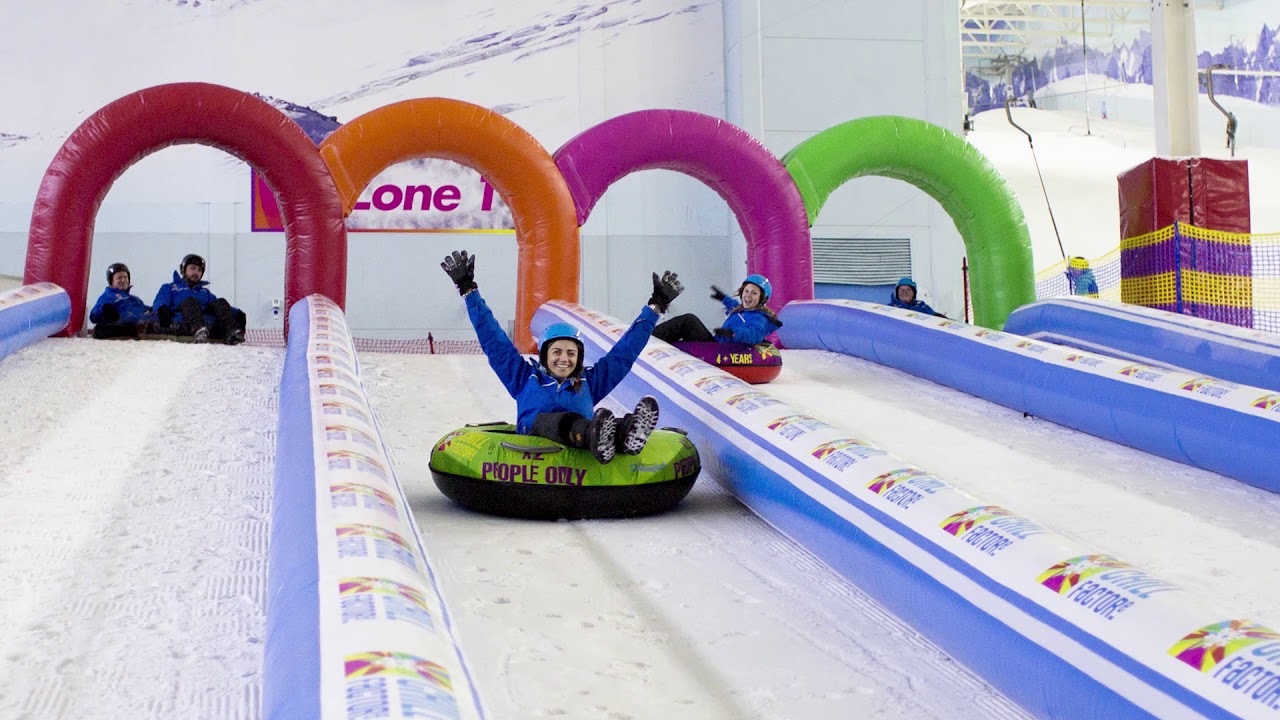 There is no need to go abroad for winter sports – there are plenty in the UK. At Stockeld Park, North Yorkshire, there is an artificial 1.2km Nordic ski trail through an illuminated forest (from £12, age 6+, until 7 Jan). If there’s no white Christmas this year kids can still go sledging and sliding at an indoor ski centre, including the Snow Dome in Tamworth; the Snow Centre in Hemel Hempstead; Snow Factor in Glasgow and Chill Factore in Manchester. 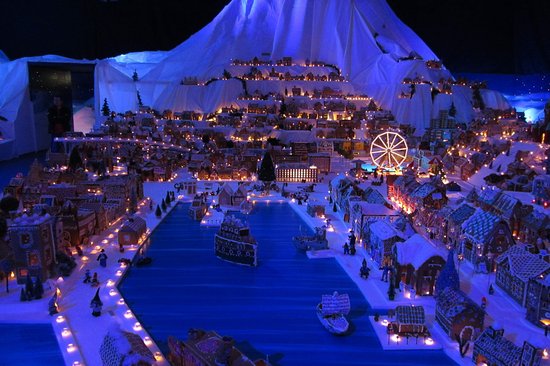 The V&A in London is hosting the Museum of Architecture’s third annual Gingerbread City exhibition. Architects design buildings, parks and public spaces, then bake them out of gingerbread – this year the theme is “imagining the future city”. There are gingerbread house-making workshops each weekend (£6 entry, £30 workshops, until 6 Jan). 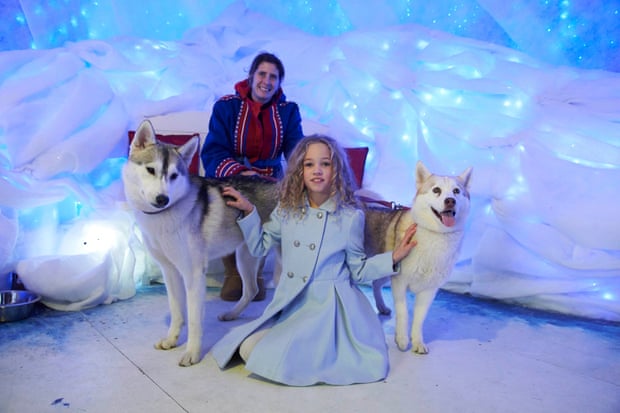 Animals aren’t just for Christmas – but it’s a good time to visit them. Stroke huskies in the ice cave at Drusillas Park in East Sussex (park entry £71.80 family of four, huskies at weekends, then daily from 13-23 Dec).

Take part in a nativity play with real animals at Pennywell Farm in Devon, including their famous miniature pigs (not traditional, but very cute, £12.95pp, until 24 Dec). Meet hundreds of donkeys at the Donkey Sanctuary in Sidmouth, also in Devon. They have been known to join in the annual carols by candlelight service (free, 14 Dec). Hand-feed Britain’s only free-ranging reindeer in the Cairngorms, Highland (£4pp,